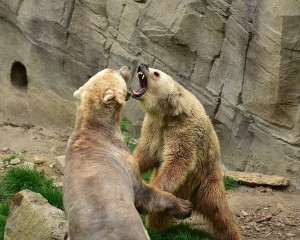 I’ve told this story a few times in the past because it illustrates how FEAR can successfully be approached and resolved.

A few weeks after I was first married, my ex wife woke up in bed beside me screaming in terror and bathed in sweat. After holding her and calming her down I asked her what had happened.

She told me that ever since she was a child she had had a recurring nightmare of her protecting a group of children from a huge Bear with slashing claws and snarling bared teeth.

And, it seemed that whenever she was under stress, she would have one of her ‘Bear Dreams’.

She asked me what I thought she should do, and I thought for a moment and replied “Next time you have the dream, there will be a moment when you will remember this conversation.  At that moment, I want you to remember to turn and face the Bear and watch what happens.”

And that’s exactly what she did!

A few nights later she had the Bear Dream again, only this time she remembered what I asked her to do. The next morning she told me what happened just as I’m telling you right now.

She told me how she became aware that she and the children were being chased by the Bear again and she remembered our conversation about turning and facing the Bear. So she did so, and was astonished to see the Bear literally start to dissolve right before her eyes.

She said “It just faded away to nothing!”

Fear isn’t real either, we just think it is.

You may wish to consider a personal session if you have similar fears. Contact us to book a session